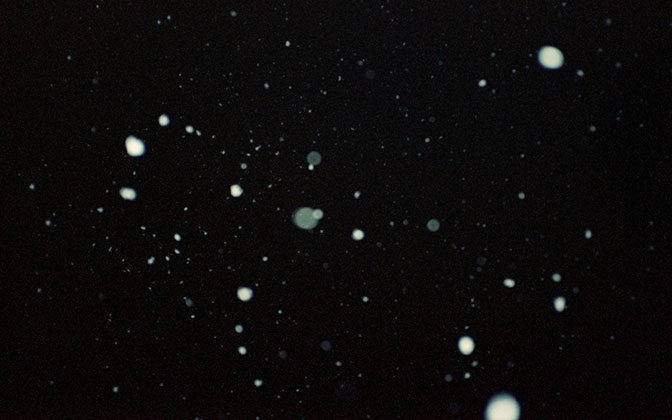 The Land2 Research Network (Bristol, Dundee, and Leeds University) has just organized a two days symposium on the work of Karen Barad and the question of diffraction (or how matter matters) she puts forward, seen through the prism of place orientated practice-based research in the visual arts and creative writing. Barad’s question sits within the investigation of Object Oriented Ontology and the broader return to realism that is currently animating the debate in the arts, as well as media, design and architecture studies, in the light of the recent re-conceptualization of matter put forward in the field of Physics.

Matter is a live issue. As a question in process, it has many nuances and lends itself to elaborations from different lines of investigation that do not necessarily share the same epistemological postulates; as is the case -for instance- with the metaphysical approach of the Speculative Realism interpretation and the dynamic and open strategies adopted by a radical materialism method.

The shared feeling is that the epistemology, and therefore the aesthetic, inherited from the “Copernican revolution” introduced by Immanuel Kant over two centuries ago has produced an excessively anthropocentric viewpoint on nature and the universe, and that the time has come for the discussion to be open anew. However the similarities end here. Strictly epistemological questions on the philosophy of science share the same space with issues concerning nature and ecology, next to identity (both in the political and logical sense), or with the more direct materialist questions raised in the artistic debate and practice. Nor such lines of investigation are clearly distinct: authors as Stengers and Meillassoux, for example, converge the same problem of the neutrino only to diverge radically in their interpretations; one developing an event-based ontology where the role of the scientist cannot be excluded but is indeed part of the very nature investigated, the other reinstalling an absolute concept of matter as “the great outdoors” before and outside the advent of any human being.

The artist should not become trapped once again in this kind of dualism. The question Barad raises is clear: how does this matter? What implications and which consequences, but also what potential and which possibilities are intrinsic to a choice? Indeed diffraction is a question that cannot be asked without hearing the echo of Donna Haraway’s “effort to make a difference” and William James’ pragmatism. Far from a dream of total objectivity in science, of absolute transcendence in philosophy, or of certainty and dogma in ethics, what is at stake is precisely how to resist the haste to reach conclusions. That is, resisting foreclosing the problem, not simply before it had had the time to unfold fully but grasping it as a hurdle to be overcome, rather than a platform for asking questions and refuting objections as Stengers and Deleuze put it. Nowhere this is more evident than in art. The matter of art, be it a tangible material, a technology, or the circulation of information (just to name some of the near endless possibilities of the exploded medium available to the contemporary artist) is not a limit to the delusion of the infinite ability to represent a meaning, but rather the very set of dimensions that constitute the very possibility of expression of meaning and of the production of sense. It is interesting to see how, in the light of diffraction, the early insights on the technology of mass communication of Walter Benjamin meet with Stengers’ analysis of the invention of the experiment by Galileo at the moment modern science emerges. Both show how a new technology matters and more importantly how it demands to be heard if it is not to be forced into the coercion of categories as stiff as they are out of touch with the times.

What is more, this allows understanding Barad’s interpretation of the phenomenon not as opposed to Kant’s, but as a re-elaboration of that synthetic process where the object is constituted as an event. This is all the more important because there is, in fact, a dark side to this matter oriented approach. An ontology oriented towards an object that is exclusively material -in the reductive sense of tangible matter only- an ontology, that is, too eager to rid itself of an anthropocentric tradition perceived as having grown stale, risks not only to find itself forced to bow to the authority of a newly restored absolute, but unable to account for political or ethical questions, or to support the agency and the responsibility of the subject.

These questions circulated in the papers presented at the Matter Matters conference with different emphases. Interestingly however, there where it seemed that materiality would entirely take over and speak for itself, local histories that would not melt away, the specific decision about how to listen so that the object could in fact ‘come forward and speak for itself’, or the simple curiosity of the artist that could not function -let alone exist- without objects, all testified that the question of matter does not necessarily demand the abdication of the subject rather a renegotiation of its relation with the object.

Mattia Paganelli is a final year PhD student at the Birmingham School of Art who was funded to attend the Matter Matters conference.