Helsinki Photomedia 2016: A conference about photographic materialities by Andrea Jaeger

In April, I attended Helsinki Photomedia 2016, the third international photography research conference dedicated to ‘Photographic Agencies and Materialities’, hosted by Aalto University. I presented the research design for my doctorate at a sub-session called ‘Materialities of Contemporary Art’; other themes included Materialities of Silence, Media Practices in Flux and Global Materialities.

The conference recruited both academics and hybrids (practitioners or artists situated in academic institutions), mainly though not exclusively from Europe. Apart from traditional read-aloud academic papers from such prominent figures as Prof Geoffrey Batchen, Prof David Bate and Liz Wells, most presentations followed a standard approach, interspersing one’s own praxis to illustrate what was said or read. However, one presentation—by Jon Malis, artist and Assistant Professor of Photography at Loyola University (Maryland)—took a different route, which I want to share.

Jon Malis took the audience on a journey through one of his artistic endeavours. He described how he first became intrigued by the various shades the colour red can take when he asked his students to bring in a piece of A4 paper printed in red. ‘How can we trust what the computer presents as a verifiable object—that pure red on my laptop in DC is the same as pure red on a desktop computer in Moscow?’ From there, he began to investigate various colour spectrums, ranging from sRGB to Adobe RGB, to show the loss of variety between them. He then turned this ‘screened’ investigation into physical objects. Holding a rainbow-coloured, stone-like sculpture in the air, he said ‘Here, have a look—that is a sRGB colour spectrum’. He circulated the piece among the audience so that everyone could touch it, to their evident delight. 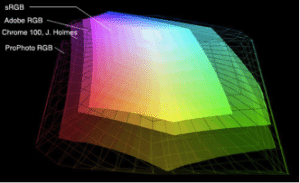 Malis offered an enjoyable hands-on experience of this crucial feature of photography by transforming a virtual colour spectrum into matter. When he had finished his talk and invited questions, his fascinated audience was still marvelling over this revelatory object, and (thankfully) no-one raised any questions about the analogue-digital divide.

Andrea Jaeger is a first year PhD student at the Birmingham School of Art and was funded by ADM’s Conference, Mobility and Networking scheme to attend Helsinki Photomedia 2016.