School of Art research seminar – Research as Practice: The Politics of Contemporary Visual Culture in the Middle East Today 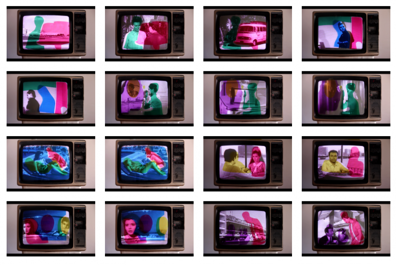 This seminar brings together leading academics and practitioners in the field of visual culture in the Middle East. Beginning from a variety of perspectives, each speaker will discuss the nature of their research and how it addresses the political, social, economic and historical specificities of image production in the region. More specifically, we will enquire into what forms of knowledge production and exchange arise from the research into, alongside critical engagements with, contemporary visual culture in the Middle East.

The seminar will include a Q and A session with the speakers.

Walter Armbrust is an Associate Professor in the Faculty of Oriental Studies, University of Oxford. His research focuses on popular culture and mass media in Egypt. He is currently in the final stages of a book on the January 25th Revolution, provisionally titled After Utopia: The Egyptian Revolution as Liminal Crisis.

Oraib Toukan is an artist and Clarendon Scholar at the Ruskin School of Art, University of Oxford. She is visiting tutor at the Ruskin and the International Academy of Fine Arts in Ramallah, Palestine. Until Fall 2015, she was head of the Arts Division and Media Studies program at Bard College at Al Quds University, Palestine. She has participated in recent exhibitions at Akademie der Künste, Berlin, Qalandiya International, The Center for Contemporary Art, Glasgow, the Asia Pacific Triennial, the Mori Art Museum, and the 11th Istanbul Biennale.

Jonathan Watkins was Curator, Serpentine, London, and Director of Chisenhale, London, prior to his appointment as Director of Ikon Gallery, Birmingham, in 1999. Major exhibitions include Biennale of Sydney (1998), Tate Triennial (2003), Shanghai Biennale (2006), Sharjah Biennial (2007) and Guangzhou Triennial (2012). In 2001, he curated Facts of Life, an exhibition of contemporary Japanese art for the Hayward Gallery, London in 2001.

Tirdad Zolghadr is a curator and writer. His most recent publication is Traction (Sternberg Press, 2016). Zolghadr is Director of the Summer Academy Paul Klee, in Bern, and Associate Curator at KW Institute for Contemporary Art in Berlin. He also teaches at the Dutch Art Institute in Arnhem.

Jonathan Harris is Head of School, Birmingham School of Art. He has published 20 books and over 200 journal and magazine essays on modern and contemporary art. Harris’s most recent book was The Utopian Globalists: Artists of Worldwide Revolution 1919-2009 (Wiley-Blackwell 2013). His forthcoming book is The Global Contemporary Art World: A Rough Guide (Wiley-Blackwell 2017). With Menene Gras and Bashir Makhoul he is the Editor of Contemporary Art in Global Asia (IB Tauris, forthcoming, 2017). His work has recently focused on global art worlds in India, China, Hong Kong, South Korea and Palestine.