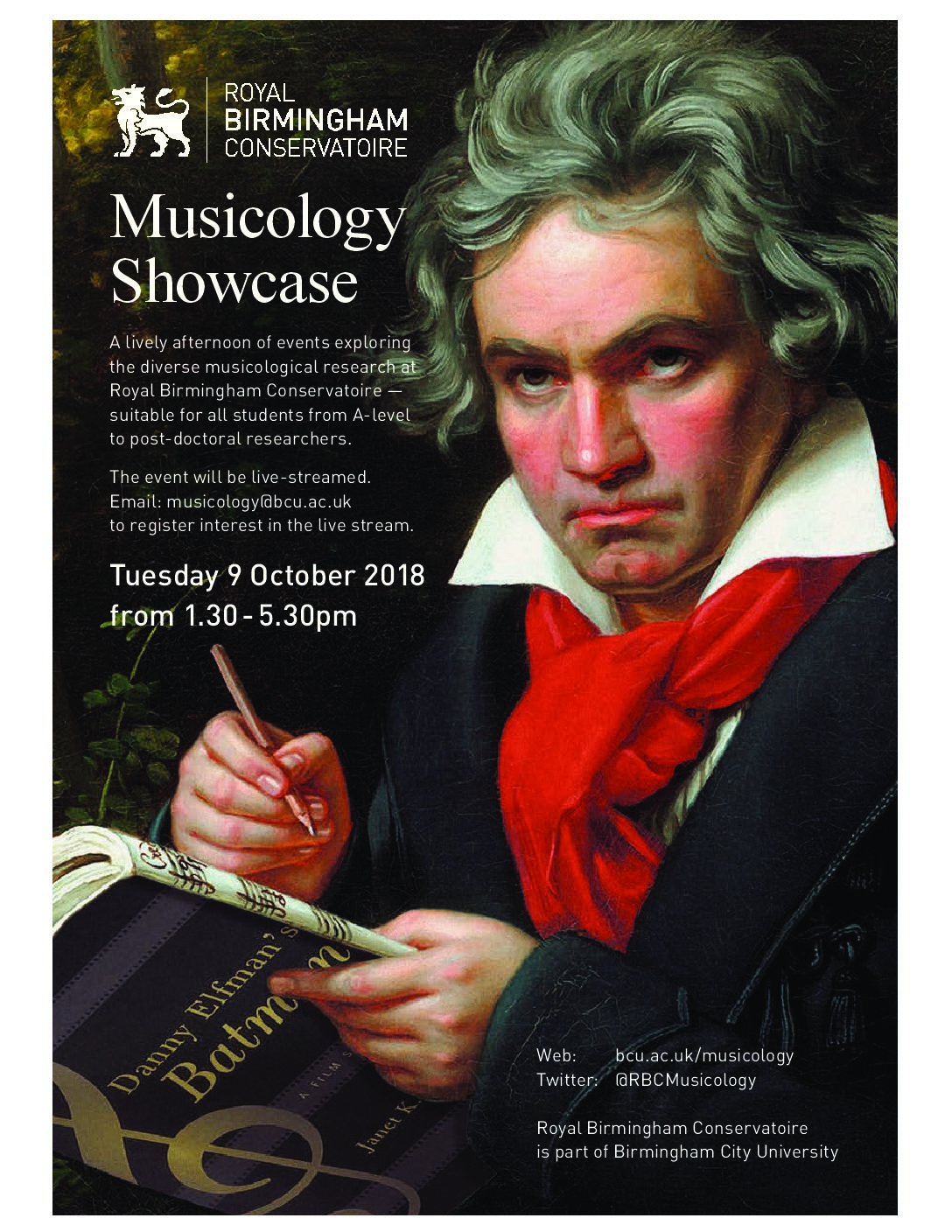 A lively afternoon of events exploring the diverse musicological research at Royal Birmingham Conservatoire — suitable for all students from A-level to post-doctoral researchers.

The event will be live-streamed. Email: musicology@bcu.ac.uk
to register interest in the live stream.

1.35 Musicology for Performance 1 — Jeffrey Skidmore (Artistic Director of Ex Cathedra) and Professor Jamie Savan discuss how oddities in 17th-century notation can be realized in performance. Dr Jeffrey Dean talks about interpreting the rhythmic notation of the 15th/16th centuries, which is more complicated than modern notation.

2.15 Danny Elfman — Dr Janet K. Halfyard, who writes on film and television music, talks about why waltz rhythms are so important in Danny Elfman’s 1989 Batman score.

3.35 Forum for 17th- and 18th-Century Music — Dr Carrie Churnside, who writes on Italian Baroque vocal music, talks about the types of evidence that tell us what it was really like to stage an opera in 1700. William Hunt, founder member of Fretwork, discusses how we might reconstruct the original performance of Edmund Hooper’s anthem for the accession of James I. Martin Perkins, Head of Early Music, describes his discovery of hitherto forgotten 18th-century cello sonatas in the library of Weston Park stately home.

4.10 Beethoven — Dr Siân Derry discusses her transcriptions of Beethoven’s piano exercises and their wider significance. Dr Matthew Pilcher explores some of the ways that Beethoven responds musically to poetic structure and meaning in his pre-Romantic Lieder. Daniel Tong talks about closing the gap between the performer and the academic, as well as how a new work can inform our understanding of a Beethoven sonata.

4.45 The Control of Music — Dr Rachel Moore talks about the ways in which the wartime climate affected the musical experiences of civilians in Paris from 1914–1918.

Chris Marshall looks at the music that the BBC commissioned for the Proms, working collaboratively with the School of Media to look at the influence that the BBC has on new music in the UK and beyond.

5.05 Pick on a Prof — Pose questions to Royal Birmingham Conservatoire’s research staff about any aspect of music.