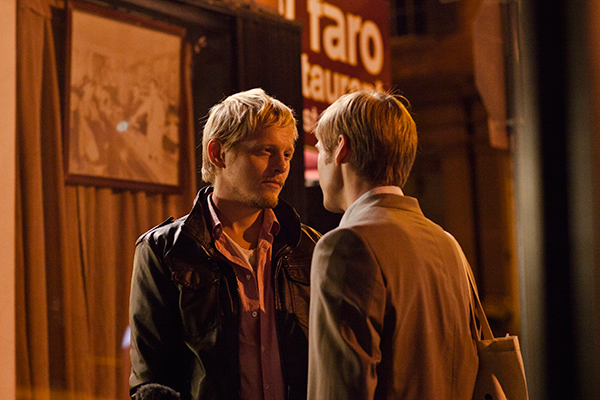 Sebastian Svegaard (BCU) | “All the Feels!”: Music, Affect and Critique in Fanmade Music Videos
The fanworks known as vids (or fanvids) are short, remix music videos made by fans within what Henry Jenkins termed media fandom (Jenkins 1991). They are narrative and present a form of argument (Coppa 2008). Vids use remixed visuals from (predominantly) film or tv set to a piece of (usually) popular music. In understanding a vid, one must constantly read what Chion (1994) terms ‘synchresis’ – the welding of an auditory and visual phenomenon when the occur simultaneously. Despite this, the research of what music does in vidding is almost non-existent, something I aim to help remedy, and will give a brief introduction to.

Charlie Sarson (BCU) | Limited Room Service: The value of images from a gay club night and the ubiquitous figure of the “jock”
The gay club night Room Service, held at cities across the UK including London, Manchester and Birmingham, has a distinctive style to their official club night photographs both graphically and in terms of the type of men who are regularly featured in attendance. This paper will explore the links between the type of men represented in these photographs and the figure of the “jock” from gay pornography and the homogenisation of gay cultures, which the ubiquity of the image of the jock is undoubtedly playing an active role in (Mercer, 2017). In addition, following on from the assertion that images of the self carry currency between gay men and men who have sex with men (MSM) (Mowlabocus, 2007), I will be considering the value of Room Service club photos, but also the cost; the cost, in this instance, referring to high levels of body and image dissatisfaction among gay men and MSM (Duncan, 2010), highlighted (but arguably also exacerbated) by the commercial gay press.

Connor Winterton (BCU) | Neo-Queer Cinema and the Representation of Sex
Over the last six to seven years there has been a wave of filmmaking emerging that I label as ‘Neo-Queer Cinema’, which includes films such as Keep the Lights On (Ira Sachs 2012), Blue is the Warmest Colour (Abdellatif Kechiche 2013), and even more recently Theo and Hugo (Olivier Ducastel and Jacques Martineau 2016). This paper will firstly delineate what ‘Neo—Queer Cinema’ is and will outline the group of films’ stylistic and narrative similarities, before analysing Blue is the Warmest Colour’s use of sex, and what these acts mean within the film’s narrative and for the characterisation of the protagonists.

Sebastian Svegaard is in the first year of his PhD at BCU, writing a thesis tentatively titled “”All the Feels!”: Music, Affect and Critique in Fanmade Music Videos”. He is MA in musicology from the University of Copenhagen, and has previously written and presented about film music and nostalgia in “Guardians of the Galaxy”, “Critical Vids and Fans” and “Vidding the Superhero”.

Charlie Sarson is a PhD researcher in the Department of Art, Design and Media, and is fully funded by the AHRC via the Midlands3Cities consortium. His research interests lie within masculinities among gay men, digital cruising platforms, and queer theory.

Connor Winterton is a PhD researcher in the Birmingham School of Media, BCU (belonging to the ‘Screen Cultures research cluster). His thesis is entitled ‘Sex in Contemporary Neo-Queer Cinema’.