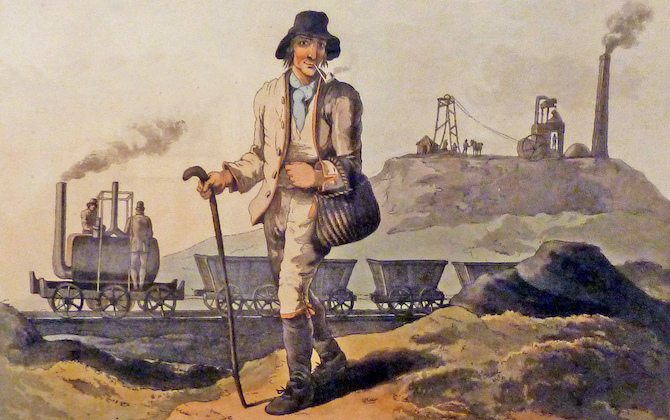 Meeting my mentee for the first time was a bit like going on a blind date. I had no idea who I was going to meet or the nature of their interests. I was nervous in anticipation.

In late autumn last year, a group of mentors and mentees all gathered in the bottom floor space of Six Eight Kafé on Temple Row. Slips of paper were drawn out of a hat, a moment later revealing the mentor-mentee matches that had been selected for the remainder of the academic year.  I since learned that these matches were the product of considerable discussion amongst The PGR Studio team – what turned out to be a skilful act of social engineering.

‘John Grayson is with Chris Hill’, it was announced. John sidled over and introduced himself: a crafts maker who was working on enamelling in the Black Country in the late eighteenth century. ‘How on earth am I going to be able to offer mentorship on a subject about which I have no clue?’, was my immediate thought. At this point, I paused and asked myself a further two questions: ‘What do I know about the eighteenth century?’ and ‘why did the team choose me to mentor John?’.

The more I considered these questions, the more I began to get at the essence of what it means to be part of a mentor-mentee relationship.  The object, as the mentor, is not only to advise and offer guidance – it is to listen and learn from your mentee. John made me think about history differently. His entry point into the subject was not through text or written sources, but through the material object. By discovering how an object was made, you could in theory excavate and expose a whole set of social and work relations. In turn, I also make use of my knowledge of ‘lost communities’ and British social history to support John’s enquiries: I encouraged him to read E.P. Thompson’s The Making of the English Working Class, which famously opens with a gambit about craft workers who have ‘suffered the enormous condescension of posterity’.

It was – and is – a fruitful relationship. By the end of the year, we were steeped in conversations about how Enlightenment classification systems and Victorian curatorial practices had distorted our knowledge of craft making and social history. We had bonded: John’s interest had become my interest. More than this, we had enriched and opened up perspectives on history by sharing our distinctive approaches to the subject. John may not have been the blind date that I had envisaged when we were matched, but in retrospect I am sure glad they did.