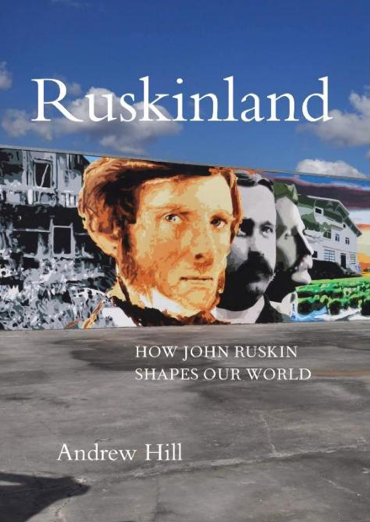 On Wednesday 2ndOctober, 12-2 in C317, Andrew Hill (Financial Times), Jenny Robbins (Ruskinland) and Tim Selman (Wyre Community Land Trust) will be coming to talk about Ruskin and his legacy in the 21stcentury. Please come and join us!

“Ruskinland”: how John Ruskin shapes our world John Ruskin shaped the world we inhabit, the way we work, the environment – built and natural – that surrounds us, and many of the services we enjoy. While Ruskin himself may have faded into the background, we still live in “Ruskinland”, where many of his proposals have fresh resonance and his insight that people need to see things more clearly to understand them more deeply is increasingly important. Ruskin sowed the seeds of the modern welfare state, universal state education and free healthcare for all. His acute appreciation of natural beauty underpinned the National Trust, while his sensitivity to environmental change, decades before it was considered other than a local phenomenon, prefigured the modern green movement. He staked his reputation on JMW Turner and the Pre-Raphaelite painters when they were under fire, ensuring their reputations have continued to burn brightly even as his has suffered.

Ruskin’s attacks on the smug champions of Victorian capitalism and free-market economics were striking precursors of the current debate about inequality, executive pay, ethical and purposeful business, meaningful work, and the perils and opportunities of greater automation.

I’ve travelled from modern Venice, to the Lake District, to Ruskin, Florida – the Gulf Coast community named after him – to trace Ruskin’s influence in the work of artists, curators, craftspeople, executives and politicians. This fascinating, prescient, contradictory thinker recognised he was living in an interconnected world and that to secure its future we must act today. In the year of the bicentenary of his birth, it is time to listen.

Andrew Hill is an Associate Editor and Management Editor of the FT. He writes a weekly column on business, strategy and management. His latest book is Ruskinland: How John Ruskin Shapes Our World (Pallas Athene, 2019), about Ruskin’s enduring influence. Andrew is a trustee of The Ruskin Foundation, responsible for the UK’s largest archive of material relating to Ruskin’s life and work of John Ruskin, and a Companion of the Guild of St George. He is also trustee and chair of The Blueprint Trust, the charity behind Blueprint for Better Business, which supports and challenges business to be a force for good. He was named Business Commentator of the Year 2016 in the Editorial Intelligence Comment Awards and Best Commentator at the 2009 Business Journalist of the Year Awards, where he also received the Decade of Excellence award for sustained achievement in business and financial journalism.