Beyond ‘Reading and Writing’: Pondering the articulation of ideas by Emily Bettison 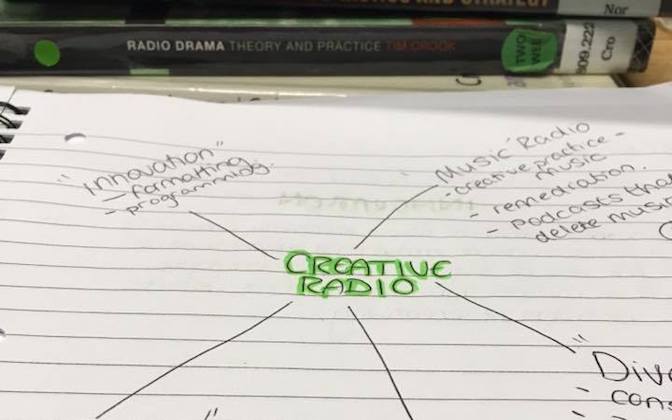 As a first year PhD Student in the School of Media at BCU I’m currently right in the middle of the ‘reading as much as possible’ stage of the PhD process. Telling people who aren’t doing a PhD that I’ve spent most of my time since September ‘reading and writing’ is the most accurate way of describing my experience so far, but this also devalues the work that goes into the first stages of PhD life. Yes, I am reading a lot of books and articles, but more than this, I’m reflecting on them, understanding how different theories and ideas link to each other, identifying gaps in literature and also starting to understand where my research fits and what I can contribute to the field through my work. Getting my head around these ideas is one thing, but articulating them in a way that could be considered ‘academic’ is another. When my PhD supervisor suggested that I present my research at a BCMCR research seminar I decided to use it as an opportunity to reflect on some of the reading I had done, and practice my articulation of the ideas that were forming in my head. After days of writing and re-writing my presentation was complete and I went to the research seminar with an aim to ‘talk about some of the initial observations I have made regarding the traditional notions that are presented in scholarship of radio, and how this first with understandings of creativity’. I’m going to use the rest of this blog post to summarise some of these ideas.

When I first tell people that I am researching radio, specifically creative radio I usually hear two things. First, usually from taxi drivers I hear: “There isn’t any point studying that, radio is dying out”. Normally the taxi driver is playing the radio in the car while telling me this. My rehearsed response is now “It’s definitely a changing medium, but it isn’t dying”. The second most common response I get is: “Oh I listen to the Archers!”. That response, while not in any way based on a theoretical foundation, has shown me something about the public perception of what counts as creativity in radio. The Archers, as a radio drama can be linked to public notions of drama, acting, theatre, which in general would be acknowledge by most people as creative practice. 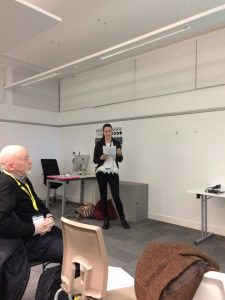 Perhaps more interesting however is that this also starts to demonstrate a notion surrounding creativity as a final output or product, which is one view of creativity that does exist in academic literature. For my research however, while acknowledging that this view does exist I want to start moving beyond this to focus on discussions of creativity as something tangible, manifested through practice. This has led me to literature surrounding topics of creativity, the creative industries and culture, but also to management journals and organisational research, which add another dimension to creativity that helps me to start establish a notion of what creativity will mean as a concept within my own research.

In 2014 I decided to study a Masters in Creative Industries and Cultural Policy, and I knew at that point that I wanted to link the theoretical concepts that I would learn, to the radio industry. This however proved more problematic than I had initially thought. As an example, one concept we explored was the idea of culture and creativity for regeneration purposes. For my MA dissertation I undertook a case study of Switch Radio in Castle Vale. This station was developed in 1995 under the name ‘Vale FM’ as a regeneration project, which clearly fits with understandings of regeneration. In this week of my MA however we also looked at the concept of clustering, which in basic terms is where organisations exist in close proximity to other similar organisations to share resources. Switch Radio is however located in a set of tower blocks in Castle Vale, roughly 7 miles from Birmingham’s City center where most creative organisations are located.

Those industries which have their origin in individual creativity, skill and talent and which have a potential for wealth and job creation through the generation and exploitation of intellectual property. [03]

…to be problematic in the context of the radio industry, where community radio for example doesn’t exist for commercial purposes. Of course we can look to the developing field of cultural ecological research to see the value of community radio in a non-commercial way, and this is something I argued in my MA dissertation. Towards the end of my MA however I still felt that more research needed to be done to link concepts of ‘creativity’ with the radio industry and as a result I am now in my first year of my PhD which currently has the thesis title: The Creation of Creativity in Radio: How does radio as an industry define, practice and negotiate creativity?

The demands and conventions of radio present an interesting paradox that both requires and restricts creativity. Considering academic study of this, radio scholarship often takes a media studies approach, which explores the production, consumption and distribution of a media text and traditionally hasn’t focused on creative production and creative labour.

Literature of radio does consider creativity through output research (Street, 2014; Verma, 2012); additionally research highlighting the formulaic qualities of radio suggest an understanding that creativity occurs. However beyond this the way that discussions of creativity are framed in radio literature is limited. Therefore while current ways of considering radio are useful, it does mean that radio research and scholarship often overlooks alternative ways of framing radio, which would be presented if we were to explore it through a creative industries scholarship lens, as I will be attempting in my own research.

In attempts to find literature surrounding radio and creativity I have often come across radio scholarship that poses a historical, case study, or textbook focus.  In the majority of these the focus is on areas such as the development of radio, community radio, audience interactions with radio, the list goes on and while creativity is occasionally used to supplement discussion, I am still struggling to find scholarship of radio that places creativity at the forefront of their discussions. I am not trying to argue that these ways of viewing radio are invalid, or that radio scholars don’t think radio is creative, instead I am questioning the way that radio scholarship traditionally articulates creativity, often through the use of synonyms for example and I will now provide some examples to demonstrate my point.

With a political economic view I have started to explore radio studies that incorporates a current structural analysis of the radio landscape (for the purpose of my research specifically within the United Kingdom). Increased consolidation of the radio landscape is linked to economic understandings of radio, for example through a suggested commodification of culture to gain funding (Hendy, 2000: 36).  In this discussion which links to ideas of value Hendy however uses the word “Diversity” rather than “Creativity”. This word choice suggesting a greater interest paid to the difference between station output, than an interest in the practices that these radio practitioners are partaking in, or an exploration of the creativeness of individual types of output on a particular station. As a radio consumer perhaps a diverse choice of radio is a high priority, but for myself as a radio researcher I think it is important that we start to look beyond this. Discussing the impact of consolidation on the individual Hausman et al (2007: 13) do depict multi-skilled individuals within radio stations, who they argue must work creatively to justify their role. This links with theories surrounding creative labour but Hausman et al (2007) don’t reference this in their discussion.

It is interesting then that while both these discussions present opportunities to draw on established creative industries theories, they seem to discuss these elements as explicit parts of the radio industries, and choose not to draw links beyond this to wider media and creative industries, where theoretical views surrounding the economic value of culture (Bell and Oakley, 2014: 31-33) for example could be relevant.

I am then led to question the ways in which radio is creative. 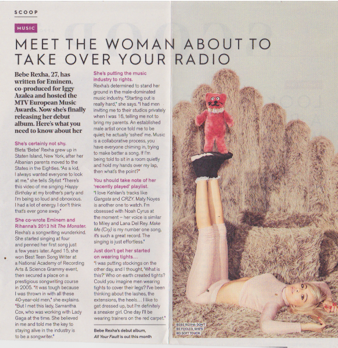 To provide an example, this article was in one of the free magazines that they give away in town. When I saw the title “Meet the woman about to take over your radio” I assumed that this was an article about a new radio presenter. Reading the article however it became clear that this article was actually about a female music artist who the writer of this article believed was about to be frequently played on the radio. Sieveking (1934) argues that there is no such thing as radio music. By this he means that the music exists in its own right, inferring that the radio by playing this music are simply remediating it. Unpacking the creativity in this process we can see that the creative practice occurred when the music was created, and perhaps by playing it radio is simply a platform for the creativity of others. In this case analysing radio through output we could argue that it is creative, but this doesn’t necessarily make the practice of radio production creative in itself.

As another example drawing links between ‘creativity’ and similar phrases perhaps it is the innovation of radio that makes it creative. In this case this quote from Barnard (2000) nicely summarises this “the central paradox of contemporary radio broadcasting: the need to routinely recreate the same programming on a day-to-day basis, making programming sound fresh yet familiar, the same but different” (184). Through this we can see that radio practice does not exist without constraints… organisational, industry and discipline conventions and requirements all impact on the practice that exists within the radio industry. Despite this however radio practitioners still create something new on a daily basis and this development of something new, negotiating the environment in which they work is one of the particular practices of radio that I am interest in exploring further in my research.

As I have hopefully shown applying the concept of ‘creativity’ to ‘radio’ isn’t a straightforward task, particularly with a lack of this discussion in current literature. By outlining some of the reflections that I have made while ‘reading and writing’ however I have started to think through these ideas and over the next few months in writing the first draft of my literature review I aim to further think through these ideas.

Street, S (2014) The poetry of radio: the colour of sound. Abingdon: Routledge.