Beyond Borders 17 – Conveying research objectives through music by Niccolò Granieri 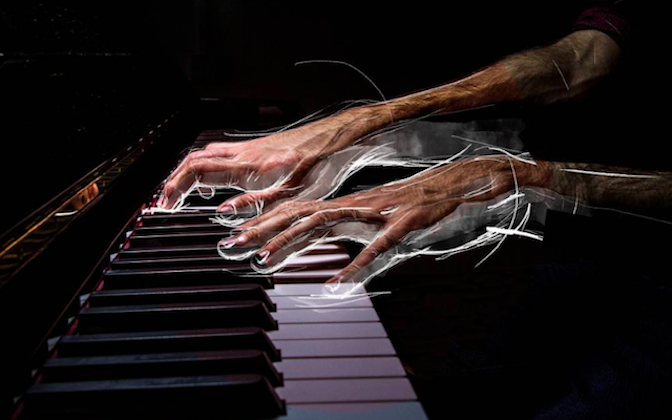 A few months ago, I was accepted at the Beyond Borders internal research conference, that was held at BCU on the 7th of July, and I was asked to present my research in an out-of-the-ordinary way.

So after thinking about ways of conveying my research aim and outcomes in a meaningful way without using the usual PowerPoint presentations, I came up with this brilliant idea:

I could play a piece on the piano, and thus becoming the first case study of my own research.

…and so I did. I crafted an idea for a piano piece and I wrote my conference application. One week after having submitted the application I received the confirmation email: I had been accepted. It was in that moment that a thought struck me: how can I convey a research aim, with a musical piece?

Since the beginning of my PhD, the key skill that tutors, lecturers and supervisors kept stressing as KEY was managing to summarise the research undertaken in one sentence. And it always seemed like a good thing to aim to: knowing the subject so well, that the main focus of the research could be pinpointed and explained in one single sentence. But a musical piece, is a completely different thing. So, as a good PhD student always does

I started freaking out.

Then after a good dose of anxiety, I focused and realized that I had to do something, but most importantly I realised that something could be done.

Dissecting my research I managed to point out a few key points that could be translated in music:

From the point of view of the audience, it is very hard to notice the hand microgestuality of a pianist. This is mostly due to the positioning of the audience itself compared to the piano keyboard and the amount of movement involved in these microgestures. So to underline the importance of gestuality, I decided to remove it.

To do so I created some wooden contraptions that enabled the pianist to play complex and extended chords on the keyboard. At the same time, these contraptions removed the physically the hand from the keyboard thus minimizing the gestures involved in the playing.

This obviously would have highlighted the importance of gestures in the second part of the piece where the pianist, realising that he was constrained by the wooden contraptions, would have started exploring the possibilities of playing the piano with his own hands.

The second part of the piece, while reintroducing the classical piano technique that the audience knows, activated the digital layer, adding a new level of interactivity and expressiveness. One of the most important things here to convey my research aims is the invisible connection between the system and the pianist. Invisible but most of all non invasive. The audience hears some digital effects added to the piano, musically understands that the effects are controlled by the pianist itself, but don’t see how. This is because the pianist is using his own piano technique, the one he refined in years of practice, and the system is learning and adapting to it in order to effect the sound.

This second part of the piece showcases the result of the first year of my PhD. A system that enables a classically trained pianist to interact with digital effects without having any prior knowledge of the technology, thus breaking the barrier between technology and creativity. Literally, going beyond the border.

Overall the experience of such a different conference was amazing. I had the chance to bring my system out of the lab for the first time, and see how other researchers decided to showcase their work in an out of the ordinary way.

Niccolò Granieri is a a second year PhD student at Integra Lab, Birmingham Conservatoire whose research explores the study of microgestural nuances in piano playing for the creation of a more intuitive and expressive keyboard interface.