About the experience (not the research) with Jerome Turner 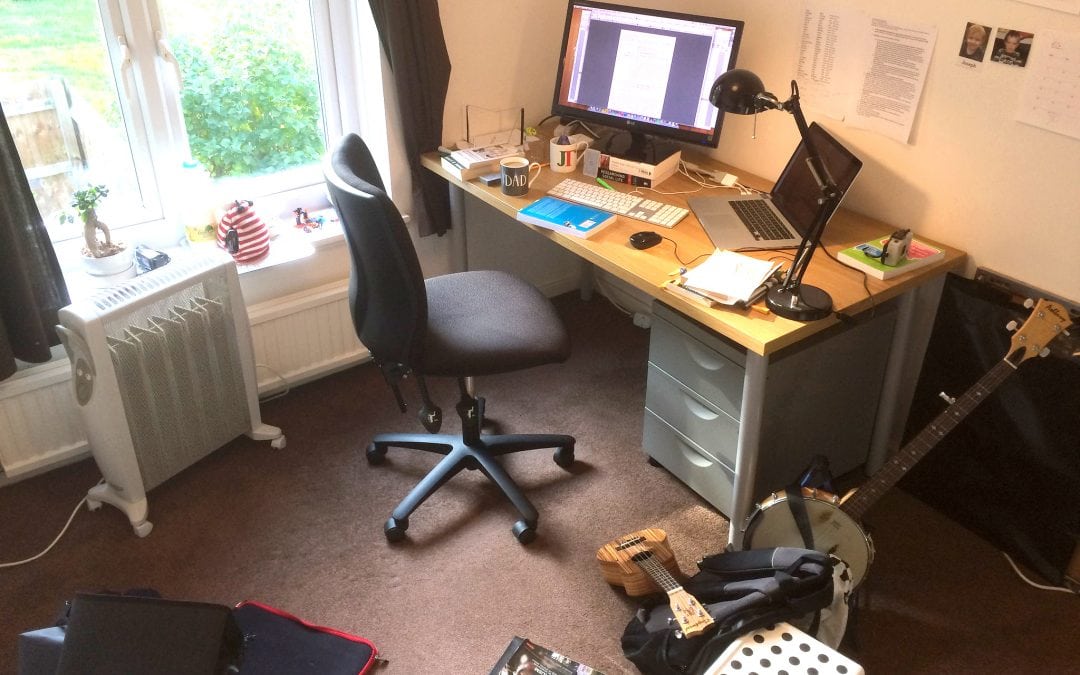 These blogs are transcripts of interviews taken by former journalist, Simon Crisp, with research students at various stages of their PhDs.

About the experience (not the research) with Jerome Turner

In this series, we sit down with a current (or recent) PhD researcher and actively try not to talk about their research. Instead, we chat about their experience of doing a PhD, how they cope with the pressures and workload, and hopefully, find out something interesting about them on the way. In this article, we talk with recent PhD completer Jerome Turner about his work/life balance, the guilt of doing things other than working on his research, and why his PhD may have been a loss to the world of bike polo.

1 – How did you find the work/life balance of doing your PhD while working in BCMCR and having a young family?

I learned pretty quickly I couldn’t do anything constructive unless my kids were asleep, or in school. I would be in my office, and they would call from the other end of the house, and I’d get down there to find they just wanted a drink of water. We moved house too, so it never got to the point that I developed enough of a social life that it was going to draw me away from the work. I’ve never been one for going out drinking or going to hundreds of gigs, so it wasn’t a big sacrifice in the way some people talk about it. I probably played less Xbox as the PhD carried on.

2 – So, how will you be spending the extra free time you now have, having completed your PhD?

I’m trying not to fill the evenings with work stuff. I’ve got more time to just do nothing, or watching TV, which is quite nice. A couple of years ago I visited some guys who play bike polo in town, and the other day I went back there, and it felt nice to be able to say, ‘I’m back from having done the PhD’ so I can start taking up things again that I’d started doing before.

3 – Was it the workload which stopped you doing other things while doing the PhD, or something else?

I probably held back from some things that could have been a distraction, but some of it would have just been the guilt of feeling like I should be doing the PhD work. So, those days where bike polo was happening, and I didn’t go, did not necessarily mean that I was going to use those hours constructively writing, but at least I didn’t feel guilty that I had gone out.

4 – How did you plan your work and keep yourself motivated, especially in the final stretch of the PhD?

I literally had three calendar sheets on my wall where each day I would write in ‘1,000 words’ or ‘revision’. I knew what I needed to get done by when. While some days you can’t do 1,000 words, another you might churn out double that, and the mini-deadlines worked well for me, though it won’t work for everyone. In the final stretch, I remember the day I put everything in one big PhD document, instead of it being in lots of chapter documents, and you see the whole thing. My problem at that point was I had 130,000 words, that I needed to get down to 80,000. But it becomes more elegant as you get towards the 80,000 words, it’s a bit like having a stone that you chip away at to make the sculpture of the hopefully beautiful or meaningful thing underneath it that’s there somewhere.

5 – What do wish you had known earlier about doing a PhD?

I guess, something about being realistic with yourself about when you can, and when you won’t be able to get things done. Having said that, one thing we established quite early was, I remember someone saying: “these people who say ‘I’ve only got a couple of hours, what am I going to get done in a couple of hours, I need a good run of three or four days to get anything useful done’ that’s rubbish”. I took that, and I remember standing on the tram on the way to work, reading papers on my Kindle.

6 – The viva seems to be something a lot of PhD candidates fret about for much of their final year, as someone who came out the other side, how did you prepare?

After handing in my PhD, I did all kinds of prep. To a lot of people, it was much more than they would, but for me it wasn’t about making the notes, but the act of calming myself down by knowing that I was doing something that I felt was preparing me, and the process of doing that made me feel like I had done something rather than sitting around worrying. I had 74 potential research questions that I said could be asked of myself. Those had come from things my supervisors had said, questions I’d recognised myself, and 40 other generic questions which could come up in a viva and apply to anybody. I put them all together and used a random number generator online to ask myself those questions on the fly quickly. This was because in my mock when I was asked a question, I would immediately start talking rather than stopping, thinking, making notes, breathing, and then answering. I also went to a couple of the viva survival sessions which were really useful, a take out of this is, go to the viva survival session.