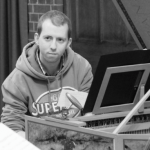 In Paris, 1672, a Roman order of priests called the Theatines celebrated the canonization of their founder with an elaborate series of events taking place over two days. From records in the Gazette de France we know that these events included services of Vespers, Benediction, a Mass, an outdoor ceremony and a concert to accompany a firework display; the music for all these events was composed by Marc-Antoine Charpentier. A reconstruction of this body of works can illumiunate the role these priests had in introducing Italian styles to France, at a time when Italian music was certainly not in favour.

Forum for Seventeenth and Eighteenth-Century Music