Conservatoire research seminar: Diseased, or Just Vulgar – What is it about Vibrato? 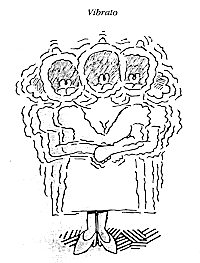 Diseased, or Just Vulgar – What is it about Vibrato? | Dr George Kennaway (University of Huddersfield)

Of all the topics that recur in discussions of historical performance, vibrato remains the most controversial. Whether missing when presumed needed, or present when held to be historically uninformed, it provokes reactions that would never be aroused by, say, contrametric rubato, arpeggiated chords on the piano, or even portamento. In this seminar George Kennaway, Visiting Research Fellow at the University of Huddersfield and professional cellist, looks again at reactions to vibrato and advice on its use from the eighteenth century onwards, not primarily to establish the considerable historical evidence for its restrained use, but rather to explore the feelings surrounding it: vibrato is often criticized as a lack of taste, a disease (or depravity), or as a sign of lower social class. Such terms invite wider speculation about the delimitation of musical discourse. Examples will be drawn from instrumental playing and singing, and reference will be made to modern vibrato controversies as well as historical sources.